AEW Revolution pay-per-view was a mess with sad ending 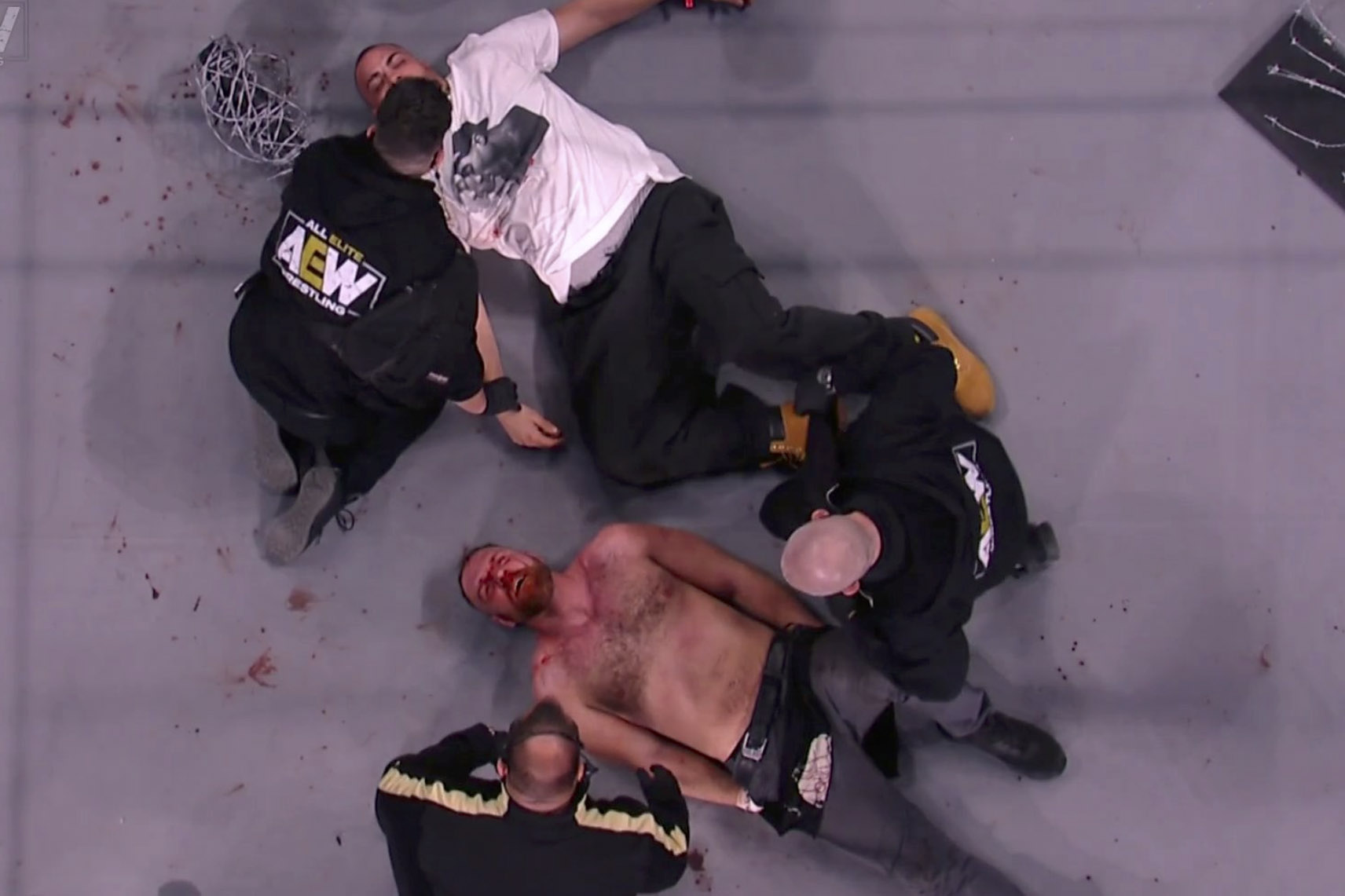 The goal of a great pay-per-view is to send the audience home happy. What All Elite Wrestling’s “Revolution” likely did was leave people confused and underwhelmed. It was all part of a chaotic, mixed bag of a show from Daly’s Place in Jacksonville on Sunday that certainly wasn’t the company’s best pay-per-view offering. After a card filled with gimmick matches, it makes you wonder if AEW needs to get back to the great pure wrestling it’s built its name on.

Here are five takeaways from Revolution:

AEW world champion Kenny Omega and Jon Moxley delivered a brutal, bloody and at times well-crafted exploding barbed wired deathmatch that was hurt a little by following a streetfight. But the ending was a dud — literally.

After Omega got help from The Good Brothers to set Moxley up for a One-Winged Angel finisher on a chair for the 1-2-3, they beat him up more and left him handcuffed in the middle of the ring as the timer established before the match was ticking down for all the explosives around the ring to go off. Eddie Kingston, putting all his differences with Moxley aside, came out and covered him as the timer hit zero.

Instead, we got the equivalent of Fourth of July sparklers going off on each ring post and a few small blasts outside the ring. Kingston for some reason sold it like a building-leveling explosion — not moving for several minutes. Moxley cut a promo after the match to the live crowd, not seen by the pay-per-view audience, but posted to AEW’s social media saying: “Kenny Omega may be a tough son of a bitch, but he can’t make an exploding ring worth a s–t.”

AEW President Tony Khan doubled down during the post-show media call on the storyline reason for the underwhelming ending.

“The plans for this [ring] we saw in crayon [from Omega] and all through the match we saw it looked very cool and it’s a very deadly, painful match,” Khan said. “At the end, I don’t know what people really wanted, unless you actually wanted us to explode the guys at the end there is only so much you can do. So without actually blowing the ring and both guys up, I think the basic explanation is Kenny’s ring was set to explode as ideal. He built this thing with a hammer and nails we saw, the final bomb didn’t go off.”

Khan also said the storyline reason will be addressed on Dynamite for people who maybe didn’t see Moxley’s promo or grasp the storyline. Even if you take Khan’s explanation as truth and not a coverup, it still won’t stop people from feeling like the company underdelivered in the moment. It’s something AEW will like have to overcome with the audience moving forward.

Sting’s first match in more than five years wasn’t a home run, but it was very much a success. The 61-year-old legend was used smartly and safely in the cinematic streetfight in a warehouse. He and partner Darby Allin, who played a huge role in the match’s production, defeated Team Taz’s Brian Cage and Rick Starks. Sting delivered a Scorpion Deathdrop to Starks to score the pin in the ring brought to the building.

Sting, who did take a powerbomb bump on Dynamite, was mostly a brawler outside of being thrown into a wall by Cage and missing a Stinger Splash. He did look old at times but overall appeared as someone who still has something left in the tank. Pairing him a lot with Starks, who sold it magnificently, was a smart move.

While the action did drag on at times, the big spots kept things interesting. Allin, who was jumping off walls and jumping through a platform with a huge elbow, left the match as someone you don’t want to miss. Cage got the powerhouse movie villain treatment, carrying Allin up the stairs while holding him vertically and throwing him through a wall at one point. Afterward, Khan sounded open to the idea of Sting having a more traditional match at some point.

“I think the cinematic matches, we’ll see Sting in those probably, but I wouldn’t rule out seeing Sting wrestle again, because I think he’s shown he’s very capable of that,” Khan said.

There were three talent surprises. The biggest was Christian — who was just in the final four of the WWE Royal Rumble — being the payoff to Paul Wight’s tease of a “Hall of Fame worthy” talent signing with AEW. It certainly wasn’t the industry-shifting moment it was originally framed as, but the positive is we will likely see Christian (who is going by Christian Cage) wrestle a good amount with fresh opponents. The bad part? An Edge and Christian reunion likely won’t happen in the ring again in WWE and him ever going into the WWE Hall of Fame likely just took a hit. Khan said Christian joining AEW came together in the last couple of weeks.

Former Impact star Ethan Page, who has a ton of potential for some outside-the-box creative and very good matches, debuted in the Face of the Revolution ladder match.

Rising Japanese star Maki Itoh was a pleasant surprise replacing Rebel as Britt Baker’s partner on the preshow women’s tag match. Itoh, who is signed with Tokyo Joshi Pro Wrestling, showed the charisma that gives her a chance to be a fan favorite. It was part of a strong night for the women. Baker keeps growing as a heel after Rebel hit Thunder Rosa with her crutch to lead to the pin.

AEW women’s champion Hikaru Shida continued to bring out a growing fierceness in a hard-hitting title defense against Ryo Mizunami.

Chris Jericho promised changes coming to The Inner Circle after he and MJF lost their AEW tag team championship match to The Young Bucks in one of the better outings of the night. The group will be holding a “War Council” on Wednesday’s Dynamite and it just feels like something where the group could shockingly vote Jericho out for holding them back and MJF completes his takeover. Maybe Sammy Guevara crashes it before it gets to the point, but the story feels like it’s heading toward Jericho vs. MJF or Guevara vs. MJF.

There were a number of matches that felt like filler on this card. The tag team Casino Battle Royale won by PAC and Rey Fenix, was just a device to get as much talent on the show as possible, which is understandable. There were some good stories told, but with teams joining every minute, everyone’s time to shine was short and quick. As always John Silver made the most of it even as Dark Order got three different teams in the match. PAC and Fenix earned a tag team title opportunity.

The Face of the Revolution ladder match  — which had winner Scorpio Sky grab an actual giant brass ring to earn a shot at the TNT championship next week on Dynamite —  had very little story around outside of Cody Rhodes’ shoulder injury that took him out of the match for long stretches. While there was some good action — including Rhodes taking a Destroyer from Penta onto a ladder — this was a spot heavy and a touch overbooked.

The best part about Miro and Kip Sabian’s win over Orange Cassidy and Chuck Taylor is that the former Rusev is growing more and more fierce and menacing. This feud is finally over and his alliance with Sabian may soon be ending. Miro pushed Cassidy into Penelope Ford, knocking her off the apron and showed no concern for her well being before submitting Talyor for the win.

“Hangman” Adam Page beating Matt Hardy with the help of Dark Order was at least fun filler, a solid match and the correct payoff to the storyline. Page getting all of Hardy’s “first-quarter earnings” storyline was a tad silly, but could lead to some awesome moments on Dynamite and “Being the Elite.” While it doesn’t appear Page is done with Dark Order, he’s got the money to buy a round or two for everyone.

Best match: The Young Bucks vs. MJF and Chris Jericho

Highlights From Harry and Meghan’s Interview With Oprah

Amid Allegations of Rape and Misogyny, Australia’s Leader Demotes 2 Ministers